One of the best-known names in cruising, Princess Cruises first set sail in 1965 with a single ship cruising to Mexico. Today, the line has grown to become the third largest cruise line in the world, renowned for innovative ships, an array of onboard options, and an environment of exceptional customer service. A recognized leader in worldwide cruising, Princess offers approximately 1.7 million passengers each year the opportunity to escape to the top destinations around the globe, aboard a fleet of 18 modern vessels.Princess Cruises was catapulted to stardom in 1977 when one of its ships, Pacific Princess was cast in a starring role on a new television show called "The Love Boat." The weekly series, which introduced millions of viewers to the concept of a sea-going vacation, was an instant hit and both the company name and its "seawitch" logo have remained synonymous with cruising ever since.  The show, which can still be seen around the world, has been widely credited with fueling the dramatic expansion of the industry.

A History of Innovation

Since the line's beginnings, Princess has frequently paved the way in the cruise industry, evolving to meet the needs of the today's vacationer. In fact, a number of Princess concepts have since been adopted by the entire cruise industry. The company has long been the leader in building ships specifically designed to accommodate an extensive number of the most sought-after shipboard luxury -- the private balcony. In the 1980s Princess pioneered the concept of the affordable veranda, once an exclusive feature incorporated in only the most expensive suites. Today, Princess' fleet offers one of the highest percentages of balcony cabins in the industry, across all cabin categories. In the mid-1990s the company pioneered the concept of putting passengers in control of their own cruise experience with the introduction of a wide range of flexible onboard facilities, amenities and services in order to create a personal vacation experience. The company also pioneered 24-hour dining with the first 'round-the-clock restaurant. Dining options were further revolutionized in 2001 as Princess became the first cruise line to offer passengers a choice in their main dining room experience – either the traditional seating or a restaurant-style Anytime Dining, in which diners could eat when and with whom they chose. Some other Princess innovations over the years include the first wedding chapel hosting modern-day weddings at sea; the unique Times Square-style Movies Under the Stars poolside movie screen; and The Sanctuary, an adults-only oasis that has become exceedingly popular with passengers looking to relax.

No matter where Princess ships sail, passengers enjoy warm and gracious service in an atmosphere of comfortable elegance.  Princess crew members are dedicated to providing exceptional service to ensure guests can escape the everyday with an unforgettable vacation. Public spaces on Princess ships are designed to feel intimate, even on the largest vessels, and feature contemporary decor, allowing passengers to enjoy themselves in an informal, relaxed onboard atmosphere that mirrors today’s lifestyles. Princess' CRUISE customer service training program, has worked to ensure superior service levels for more than a decade, making it the longest running such program in the industry. This guiding philosophy defines the Princess onboard experience and includes a variety of programs to make sure that onboard staff members work in unison to serve passengers, and provide a remarkable cruise experience.

Princess' more than 150 different itineraries offer travelers the opportunity to literally cover the globe, with sailings to six continents that call at more than 300 ports and destinations around the world.  Destinations include the Caribbean, Alaska, Panama Canal, Europe, Mexico, South America, Australia/New Zealand, South Pacific, Hawaii, Tahiti/French Polynesia, Asia, India, Africa, Canada/New England and world cruises.  Princess passengers can enhance their cruise experience with a wide array of in-port excursions worldwide, and the company's cruisetour offerings enable passengers to combine their cruise with a full land tour. In particular, having led the way in Gulf of Alaska cruising, Princess maintains a strong presence in the 49th state.  Through its Seattle-based Princess Tours division, the company operates a wide variety of spectacular land and sea experiences in the majestic "Land of the Midnight Sun."  The largest cruise and tour operator in the state, Princess operates as many as eight cruise ships, five riverside wilderness lodges, a fleet of deluxe motor coaches, and luxury domed rail cars -- which provide easy access to Alaska's interior with the line's unique "Direct to the Wilderness" service.  As a result, Princess passengers can connect seamlessly between cruise ship and a land tour, giving them the opportunity to experience Alaska's most popular attractions in a single vacation.

Princess has an additional ship on order and will add a new "Royal Princess" class vessel to the fleet in spring 2017. This as-yet unnamed 143,000-ton vessel ship is being built by Italian shipbuilder Fincantieri and will carry 3,560 guests. Princess Cruises is part of Carnival Corporation (NYSE: CCL and CUK), one of the largest vacation companies in the world. 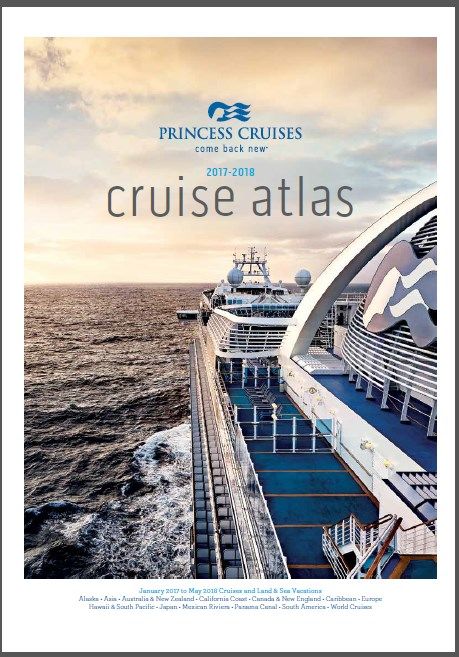